BELLA VISTA— A small bell sounded across the expanse of the Bella Vista Memorial Garden Cemetery on Monday morning as more than 200 people in attendance sat in silence. A member of the Veterans of Foreign Legion gently stuck the bell more than 50 times, once for each name read from the roll call of recently deceased veterans.

Representatives of the Veterans of Foreign Wars, the American Legion, Disabled American Veterans and the Military Officers Association of America read the names of the veterans, many of whom had served in combat zones including World War II, Korea and Vietnam.

The day's keynote speaker, Navy Capt. Luke McCollum, said the day was an opportunity for Americans to reflect on what member of the U.S. military had worked to achieve on their behalf.

"We share our devotion, our love, our respect and absolute amazement of those who have made the ultimate sacrifice," McCollum said, for "those who President Lincoln said 'have paid the full measure of devotion to duty.'"

Monday's event featured a rifle salute by the Northwest Arkansas Honor Guard, composed of members of the American Legion and the Veterans of Foreign Wars. Several singing ensembles also performed, including the Perfect Harmony Women's Barbershop Chorus, which performed "America the Beautiful" and Lee Greenwood's "God Bless the USA."

Caryl Fleck of Bella Vista said she has attended Memorial Day services since she was a small child.  "It's something my father instilled in me," Fleck said. "I feel it's where I'm supposed to be today. When I was a child, we called it Decoration Day, and it was the day everybody went to decorate the graves. It wasn't so much for the veterans, as for the memory of anyone gone. But as time has gone on, it becomes very much a veterans' day, which makes it touching for many people."

"I'm walking to see the names so I can remember," Fleck said. "I recognize a name, and I spend some time in memory of that person, and I find that comforting."

Historians date the first memorial celebration in 1865, when freed slaves exhumed the bodies of slain soldiers from a mass grave in Charleston, S.C., in order to give them proper burials. In 1865, General John Logan officially proclaimed Decoration Day. Over the next several decades, other Northern states gradually adopted the holiday. Many former Confederate states generally refused to acknowledge the national holiday until after World War I, when the holiday was no longer seen as solely connected to the Civil War.

John Haveman, who served in the Navy from May 1941 to September 1945, said he remained active in Memorial Day celebrations in order to remind himself of the sacrifice previous veterans had made on his behalf.

"I feel the same way the other vets do. We do this to honor the vets who have gone before," said Haveman, who joined the American Legion 64 years ago, and is a member of the VFW as well. "This is not only World War II, Korea and Vietnam. This goes back to our beginnings. There are Revolutionary War veterans buried in some of our cemeteries in Arkansas. We honor every veteran that has gone on before."﻿

Where to Find Us: 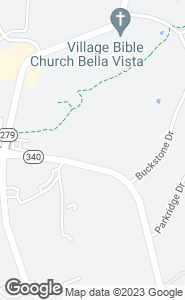 If you are using GPS to locate the cemetery the point of reference you want to use is the Bella Vista Family Church Of the Nazarene, 760 W. Lancashire Blvd. Bella Vista, AR 72715

From Highway 71, North or South bound

Take Exit 98 West to Buckstone Drive.  From the intersection of Highway 71 and Buckstone Drive it is approximately 4.75 miles.  Turn right and follow the road into the cemetery.